In the previous Village Crier issue, we reported how the Scout group was just returning at the end of April after having to close from January due to the 2nd Lockdown. At the time of writing this article (July 2021) we are looking at getting a bit closer to a new normal where hopefully the group will be able to function without disruption. However, on reflecting on the running of the Beavers, Cubs and Scouts over the past year, we were outside all the time during late Autumn and the Winter but with the Leaders and Scouts having found it very enjoyable and with the obvious health benefits, we will be looking to be outside as much as possible in the future whatever the time of year, saving indoors for only the very worst of weather.

During May and June the Beavers and Cubs each enjoyed time at Willowgate Activity Centre, (Walnut Grove) where they enjoyed various water sports with the ever increasing popular paddle boarding. It was great for them to get out and enjoy themselves again as it has been a tough year for them. 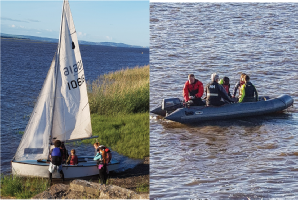 Above the Scouts are preparing for pushing off on the River Tay and the all-important Rescue Boat which operates whilst they are out sailing.

Away back in October 2019 the Scout Group were planning our next nights away and had decided on the Dalguise Activity Centre. At the time it seemed one of the more straight forward breaks to arrange with food, accommodation and all activities provided, all we had to do was turn up. However, as we all know Covid happened and the trip scheduled for May 2020 was cancelled in February 2020, with it being rescheduled for June 2021. At the time we were hoping everything may well be behind us by then.

As the country started to open in May and June 2021 it so happened that the scouts were able to attend Dalguise, but only after a risk assessment that we produced which was thick enough that it could choke a combine.

Above the Scouts taking part in the Sensory Trail where they must rely on each other for help.

Although the whole trip to Dalguise ran very smoothly there was one incident that, due to the screams, nearly had locals call Tayside Police, however it was soon clarified that no one was being attacked, and the murderous screams were merely our adventurous leader Jude Tait screaming in fear whilst fronting it out on the giant swing, much to the amusement of the scouts on the swing with her.

There are a couple of big dates coming up for Abernethy (66th Perthshire) Scout Group in 2023, when the group will be celebrating 50 continuous years since the current group was last registered in March 1973 and Abernethy celebrating100 years in September 2023 since a Scout group was first formed in Abernethy. Although it is 18 months away we are in the early stages of planning and are appealing for anyone within the village that attended the Scout Group in Abernethy at any time to share their memories, stories and any pictures as we hope to have a celebration of scouting. The Pavilion will also have surpassed its 30th Anniversary since it opened and we will be looking to celebrate that during the same year. There are a lot of Individuals that gave up their time to ensure that the Scout Group had such a great home which is the envy of numerous groups throughout the county; what you need to keep in mind is that the Scout Group had no home prior to this. Steve Johnstone, Bruce McNaughton, Ian Miller, Robin McDonald, Alan Gourlay to name a few, deserve recognition as we all enjoy the fruits of their labour all those years ago, and we’re hopeful that we can include them in our celebrations in the future. 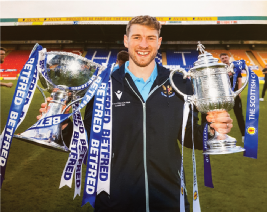 Finally, I have mentioned our footballing ex Abernethy Cub in the previous issues, but he keeps winning things which makes it impossible to not mention him again. After winning the Scottish League Cup in February David Wotherspoon and his team mates only went on to also win the Scottish Cup with him again playing a pivotal role and being awarded the man of the match award. St Johnstone are only the second team outside of the old firm to achieve this, the last being Aberdeen in 1991. To put this achievement in perspective, St Johnstone were 10,000 -1 to win both cup trophies and you can get odds of 5,000-1 to discover the Loch Ness Monster or find Elvis alive, so in theory if you discover the Loch Ness Monster and find Elvis alive in the same year, you would be equal to St Johnstone’s latest achievement. When David was playing Cub Football everyone knew he would go on and be a successful footballer and win trophies, but we just didn’t ever think it would be with St Johnstone. I’m sure all of Abernethy are very proud of his achievements.

Pictured above David Wotherspoon on his return to McDiarmid after winning the Scottish Cup.